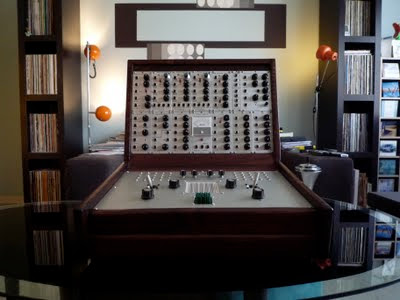 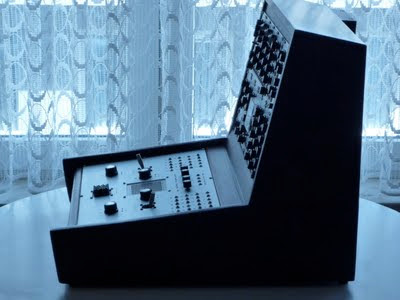 Ever since I've been into synthesis, I was fascinated by the odd looks and sounds of EMS instruments.
Some time back I met Constantin through the release of the excellent The Synthi Group VOL.2 compilation. We soon discovered we have lots of things in common music wise, a similar approach to electronic music production, similar tastes in music and the same immoderate passion for EMS instruments.
Constantin is the happy owner of a lovely Synthi A and an AKS. We sometimes play together and each time he brings his machines along to my place, the passion grows stronger. Not only the passion grows stronger, but also the frustration because EMS instruments are so rare and they go at such crazy prices these days.
That frustration made me search for alternatives in the SDIY world, and I found some... But, lacking the necessary competences, time and finances to build an EMS clone, I had to go for another solution.
All of a sudden it all became clear to me, I had all the modules necessary to assemble a hardware emulation at hand, within my Eurorack system. I already had the possibility to patch up my Eurorack system in an EMS like configuration with my FriFri Deluxe patch matrix . I pushed that idea a little further by taking those modules out of that general Eurorack context, to create a self contained, autonomous and independent instrument... this is how the Little Putney was born, my take at a hardware emulation of the EMS VCS3.


Let's start with the cabinet. The design I made was to recall the distinctive VCS3 silhouette, without being an exact replica. So, I'm off to the DIY store to get some wood and stuff to build a cab...
Here we go : 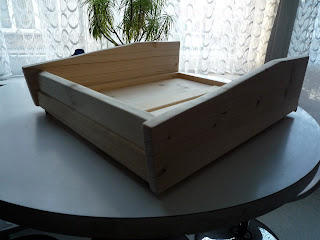 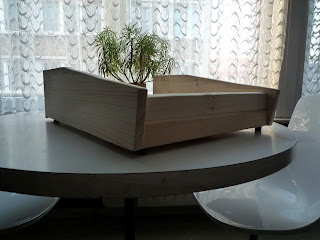 With the upper part : 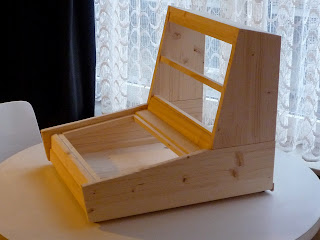 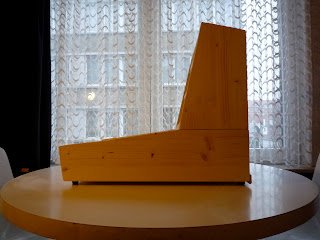 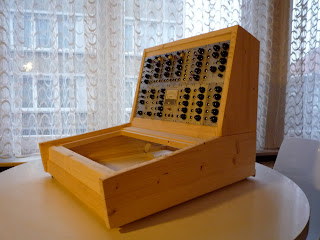 The first attempt at staining the cab is not satisfactory, the tint is too "red" : 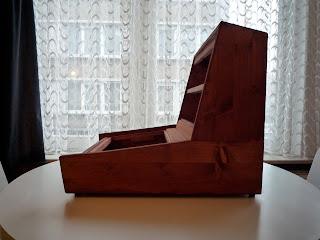 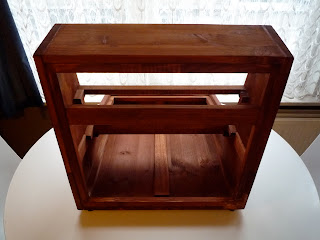 After a couple of sanding sessions and a few layers of "Wenge" staining, this is a more appropriate finish. Also incorporated the backpanel with power supply and busboard, that was taken from an Analogue Systems RS-15 case, and fitting the bottom panel : 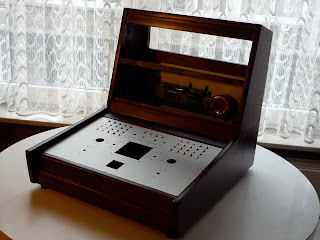 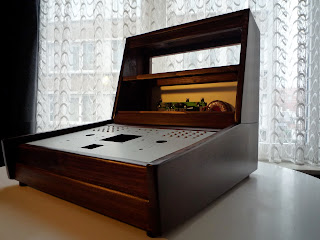 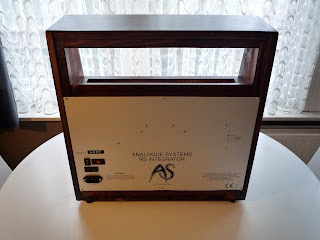 A VCS3 hardware emulation would not be complete without a patch matrix, a joystick and a spring reverb. So, once again, I did a design for a panel with Front panel designer and had it made by Schaeffer AG . The panel is designed to hold a 20x20 matrix by Ghielmetti, a 10x10 matrix as patch pin holder, two Doepfer A-174-1 joysticks, a Doepfer A-199 spring reverb, 20 input jacks to the matrix and 20 output jacks from the matrix. 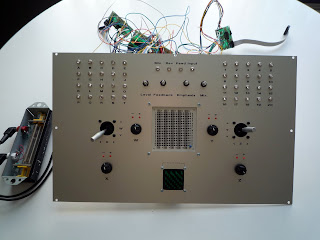 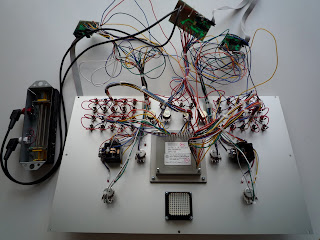 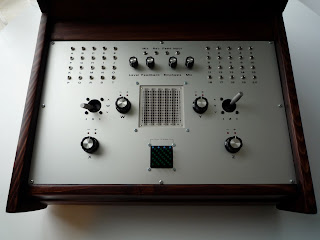 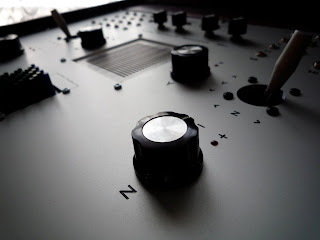 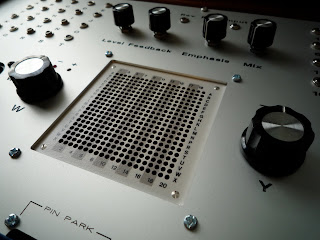 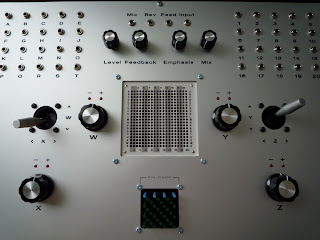 Fully assembled and ready to roll, at last ! 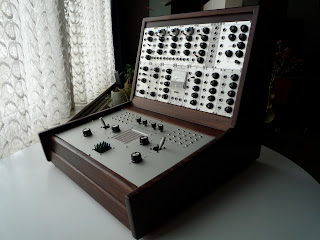 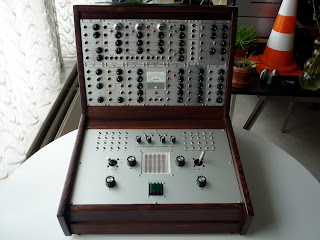 This configuration is to cover a maximum of EMS functionality with some left out but with some add-ons that are only available to owners of modded Synthis/VCS3s like osc sync, variable waveshape on all waveforms, selectable 18dB/24dB slope on the filter, switchable slew on the cutoff, bipolar trapezoid output, etc...

Results are sonically convincing, even though I'm aware that this synth does not, and never will, sound the same as a genuine EMS synth because the magic of the EMS sound resides in the particular interaction between modules, the quirkyness of their respective responses and the "quality" of the components used for the circuits...for example the "sound" of the VCA's
or the reverb driver circuit !
The reverb tank is mounted on the back, outside the cab, to prevent it picking up transformer hum from the power supply. 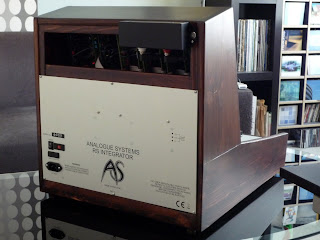 Here he is for his first night out, with his friends TTE & Moisturizer. 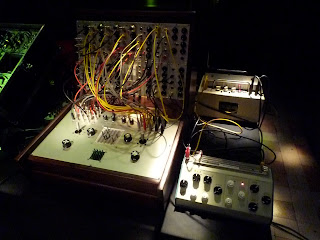 And finally, back home, with some new and slightly smaller knobs to replace the old Eagle fluted that were a bit large and hiding some of the panel graphics. 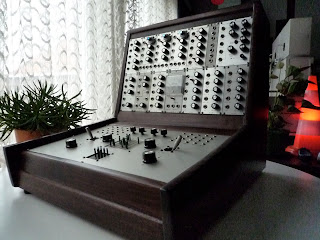 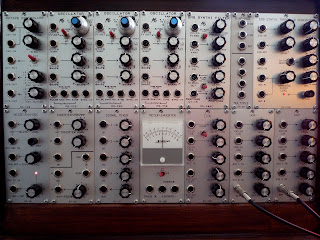 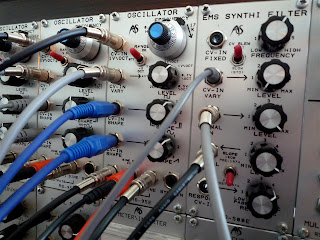 Next step will be the redesign of the bottom panel. I will sacrifice the left joystick to implement 9 passive attenuators to control the amplitude of the oscillator waveform outputs. Also, I intend to design a single panel to hold the Analogue Systems modules and thus reinforce the visual unity between upper and bottom panels, as the original panels differ in color depending on the batch and some of the legending wears off.
Stay tuned !
Posted by Zeitdehner at 6:03 AM 10 comments: