When I first thought of my Mos-Lab system, which is quite basic, the intention was to expand its capabilities with the Eurorack system I have and to afterwards complete it with some other 5U modules to obtain a self contained, cohesive, versatile and powerful system. The problem with 5U is that if you want such a versatile and powerful system you easily end up with a huge system, at least with Mos-Lab/ COTK/Dotcom type of Moog clones, just because of the basic nature of the modules... the one (huge) module = one (simple) function syndrome.
Whilst remaining in the MU format, I went looking for modules with much higher functional density and I found some interesting options in Oakley or SDIY, but still, I wanted something else, with a different design philosophy and overall character. That's exactly what I found with the Original Rob Hordijk Designs modules.

So, I settled for a six module combination to start with : a Rungler, a Triple LF-VCO, two OSC HRM, a Triple Input Filter and a Dual Fader. This little set of modules is already very powerful all by itself and contains no less than 7 VCOs, 3 VCFs and 5 VCAs (without counting the numerous CV controls with attenuators) !
Later on I will add another row of Hordijk modules to eventually get an instrument consisting of two rows of 12 MU each of Mos-Lab modules and two rows of 12 MU each of Hordijk modules. This is still quite "reasonable" in terms of size and cost.
This is how the mixed system looks for now, in its home made wooden cab : 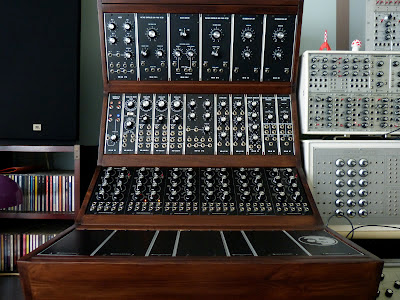 Before I get to single module descriptions, I would like to share some insight to the philosophy behind Rob's designs. In the process of designing a module, the first constrain is that of the format of the module. For that matter Rob has settled for two units wide MU (Moog Unit) panels. He then sees what maximum functionality can be fit into that finite three dimensional space, i.e. one can only fit that much components onto x square centimeter of PCB, and one can only fit 8 potentiometers and 10 jack connectors (maybe a very few leds and a switch...) while still retaining comfortable ergonomics with clear and logical control layout. This space equation is the main driver behind the engineering choices that have to be made, i.e. can I have voltage control with attenuation over that parameter or not, or would another feature be more useful or more interesting. No guesswork here, it's all about pure engineering skills Rob has developed over many many years working in the electronics industry. Every single feature is thought out carefully, as every single electro mechanical part and component is carefully selected for maximum performance and reliability.
Also notable is the fact Rob has total control over the whole conception and building process. He makes his own PCBs, he stuffs and wires them manually, he cuts and drills his own panels, labeling of the panels is done in house as well as assembly,  trimming and calibration of the finished modules. He does it all by himself ... well, almost, as he has the precious help of his friend and associate Richard. Impressive ! Even more impressive are the resulting qualities of the modules. We all know perfection does not exist, but Rob's modules are getting damn close to that ! Rob puts all his heart, his knowledge, his experience and his skills in his designs. Everything is relevant, every feature is useful and will be used, no flashy, trendy bells & whistles, no useless space filling or price boosting gadgets ... just wonderfully crafted tools with huge creative potential, that perfectly fit his conception of an analogue modular synthesizer system. 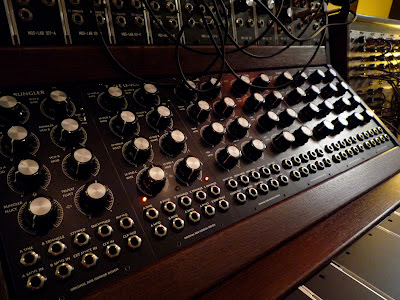 Rob, just like Seb from Mos-Lab, builds on demand, no stocking items... with that difference that Rob works fast : delivery of my modules was just about a month and a half away from the moment I confirmed my order.
I personally went to The Hague to pick up the modules at Rob's workshop. This gave me the opportunity to meet him, to learn about his modules as a system, to discuss possible evolutions of the system (he's developing some multi panels, integrating 3 individual modules with some normalizations)  and to discuss analogue modular synthesis in general. In short, I had a great time.
Even more so now that I'm enjoying working with his modules.

Every single module is packed with some clever features, some quite unique. This makes them obviously more complex, with a steeper learning curve  than the average and it takes many many hours of practice to get the full grasp, to understand fully the logic behind certain functions, even for a "seasoned" amateur like myself. It's all about trial and error, happy accidents due to the lack of user manuals and the scarce information being available. Fortunately, Rob is always happy to provide detailed explanations and flow charts. Also, some general information can be found over here : Rob Hordijk Designs Wiki page

This is a special circuit that is based on two oscillators combined with a shift register. These two wide range oscillators (not compliant to the 1V/Oct standard response) can cross-modulate and/or can be modulated by external signals. Oscillator A produces a Sine wave and provides clocking for the shift register. Oscillator B produces a Triangle wave and provides the material for the shift register. A special Fluctuation modulation signal derived from oscillator B provides combined AM and FM to oscillator A and can be replaced by an external signal. Oscillators A & B are available as direct outputs. The output of the shift register can be applied to oscillator A in Stepped, Smoothed and Pulsed modes simultaneously. These Stepped, Smoothed and Pulsed signals are also available as direct outputs. Clock In & Out makes syncing to other modules possible.
The Rungler has different operational modes that can be selected with a Switch. This module is a unique source of audio and modulation signals, that produces unusual, unpredictable, organic, chaotic or subtly shifting noise, tones, melodic and rhythmic patterns. A microcosmic source of infinitely varying automatic electronic music.

Here's a video of Rob explaining the Rungler module:

LF-VCO A provides a Sine wave similar to that of VCO A of the Rungler. It has a wide frequency range going from quite slow to well into the audio frequency band, so it can be used as a sound source as well as a modulator. This LFO is tied internally to LF-VCO C, the latter will modulate the former in FM and in combined FM-AM with the Fluct control (similar to that found on the Rungler). LF-VCO A can  also modulate the frequency of LF-VCO C for cross-modulation. Naturally, that normalization can be replaced by external modulation signals when inserting cables in the respective CV inputs.

LF-VCO B produces Pulse and Triangle/Saw/Ramp waves with variable wave shape which are simultaneously available as direct outputs. The wave shaping is set manually. This one has its frequency range set lower than that of LF-VCO A.
The frequency of LF-VCO B can be modulated internally by LF-VCO C or by an external signal.

The Triple LF-VCO has three operating modes, selectable with a switch :

A little illustration of the Halt function :

And the Master himself explaining this module :

This is a fully featured, wide range, voltage controlled oscillator with simultaneous dynamic control over pitch, timbre (harmonic content) and amplitude ! The core is Sine & Cosine based.
It has a 1V/Oct control input, duplicated on the Chain Out connector to be able to distribute the same pitch control signal to several oscillators, and an attenuated frequency control input.
There's a built in VCA with manual initial gain control and an attenuated CV input.
VCA output and direct oscillator output (Full out) are doubled for convenient patching to two destinations (i.e. to have two separate signal paths sourcing from one oscillator).
Dynamic wave shaping is available through the ODD HRM & ALL HRM controls.
ODD HRM morphs the Sine output to a Square wave under manual and voltage control (without attenuation).
ALL HRM morphs from Inverted Saw (manual control fully anti clockwise) through to Sine (manual control set to noon) to Saw (manual control fully clockwise). The HRM MOD CV input has an attenuator.

Here's what Rob has to say about his oscillator module :

This is a  4 pole (24dB) multi mode VCF with an unusual topology in that it doesn't have separate outputs for its different responses (LP, HP and BP), but instead it has three inputs and one mixed output. The three inputs are placed upfront of the filters and each input has a Level control that determines the amount of signal that goes into each filter. This way one can dial in specific responses by setting the levels of the respective inputs. This is valid for a single sound applied at the LP input, because this is normalized to the HP and BP inputs. But, one could also input a signal to the LP input, another signal to the HP input and a third signal to the BP input. The output would then be a blend of the first signal treated by the LP filter, the second signal treated by the HP filter and the third signal treated by the BP filter.
The LP, HP & BP inputs are DC-coupled so that also CV signals can be processed.
Both Cutoff frequency and resonance are under manual and CV control. There's a 1V/Oct CV input to the Cutoff frequency and two supplementary FM inputs with attenuators. When no CV is input to the MOD II control, it acts as an overdrive of the resonant peak,  putting emphasis on the harmonics of that peak, delivering a smooth, subtle and very natural distortion effect. Naturally, this works best at higher resonance settings.
This filter will not go into self oscillation.
Next to the main filter output there's also a VCA output for amplitude modulation of the filter (unattenuated CV input to the VCA and no control over initial gain of the VCA).

Again, some more explanations by Rob :

The Dual Fader is really a very versatile and handy module, that can be used in various ways and at different points in your patches. It has two independent crossfaders/panners with two inputs and two outputs each. Inputs are DC coupled which means it will process CV signals as well as audio signals.

You could have one channel set up as a fader for CV signals and the other as a panner for audio signals.

Each channel has a 20dB boost available to, for example, adapt external line level signals to the signal levels inside the modular. This 20dB boost is applied to the A2 & B2 inputs. A1 & B1 inputs are normalized to the A2 & B2 inputs respectively, so that when no jack is inserted in the inputs A2 & B2, the signals present at A1 & B1 are duplicated and can benefit of the 20dB boost.
Channel B has manual initial gain control over its B1 input.

Examples of use of the Dual Fader :

The above discussed modules together in a compact system provide amazing creative potential, unrivaled by any other MU - 5U manufacturers (exeption made for the Modcan B series). Also, integration of the Hordijk system with my Mos-Lab system is seamless and the resulting instrument performs way above my wildest expectations. Both systems complement each other very well and the Hordijk system breathes new life into my "dusty, old" Mos-Lab which comes out with new attitudes and unheard sounds.

Only one more row in the cab to fill with some Hordijk modules... quite soon, hopefully...