The idea of building a Modcan B series system came up in my head somewhere by the end of 2012. I then planned on a theoretically ideal system that met my musical ambitions and financial capacity. I was lucky enough to find someone in Germany willing to part with most of his own system. First modules arrived by the end of March 2013. Shortly after that came another, larger batch of modules... just about enough to have a small but coherent and effective system that could be used in stand alone. Now it's a little over two years in the making, having taken the opportunities to buy second hand modules as they came within my reach. Not that I do not want to support Modcan directly, but the cost to have new modules shipped and imported from Canada to Belgium is quite prohibitive with arbitrary import taxes, handling fees and 21% VAT added on top of the already hefty but still decent prices. After all, in buying second hand, the manufacturer has been supported once already and the customs had their share as well, so I don't feel bad when offering correct return on investment, with little or no loss, to the seller of these second hand modules... I think this way of doing is fair to all parties !
I only bought one module (35B Spring Reverb) direct from Bruce, and that ended up to be very expensive with all the above extras...

Anyways, enough money talk, I now have the feeling the White Dwarf V2 project has come to maturity. In fact, when looking back at the initial plans, I find the current system being very close to how I imagined it to be back in 2012. It has taken me a little further than I projected, but in essence it is the instrument I dreamed of !

Given the format of the modules, its actual size and footprint are still very reasonable, with tremendous creative potential, wonderful ergonomics, fantastic build quality and bags of character, both esthetically and sonically. This all adds up in a system that is equally pleasant to play, to listen to and to look at.

As you will see in the following pictures, I've now set up the system in three more or less distinctive functional groups.

First we have the base console with CV generators and delay effects: 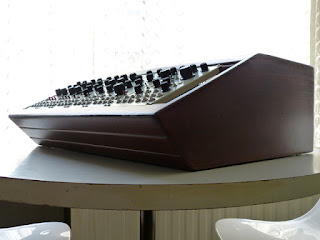 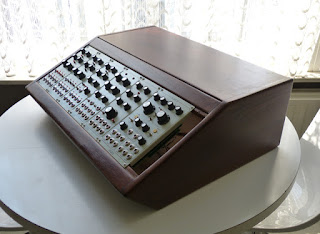 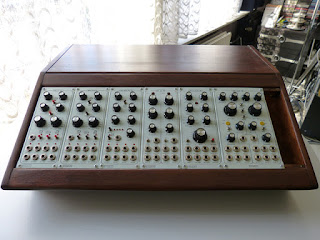 Then we have the main cabinet, with focus on treatments and processors: 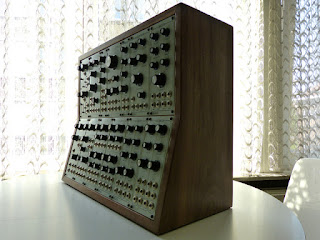 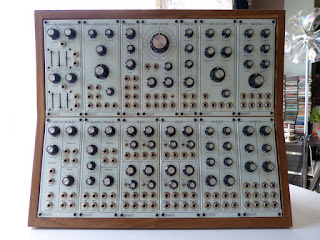 Finally we have a dedicated oscillator bank: 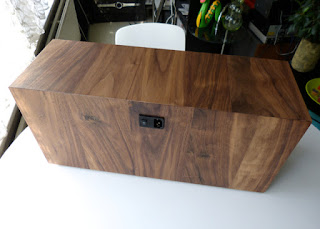 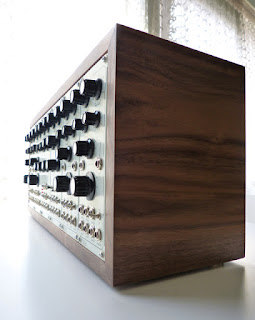 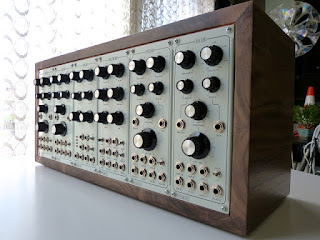 The three cabinets are of my own design, the base console is 100% DIY, cut and assembled in my kitchen... pine wood with Congolese Wengé stain finish. The main cab and the oscillator bank were cut and assembled in a wood workshop, plain walnut with natural varnish.
All three cabinets have their own IEC inlet with power on switch and fuse. Each sports a Mean Well RD-3513 PSU. The base console has a Rob Hordijk made power distribution board, the main cab has two Cynthia boards and the oscillator bank has a DIY board... all with assorted DIY power connection cables.

Even with different form factors, different looks and different functional siblings, the three cabs fit together nicely to form a coherent, well balanced, flexible and powerful single instrument, with a strong and charismatic identity, and that integrates perfectly into my working/living environment: 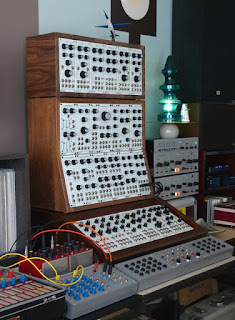 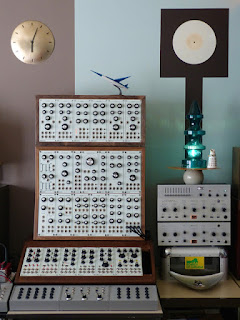 This set of modules provides for all the basic needs and beyond I have in my current musical project.
Actually the system has come to a point I don't feel the need anymore to extend on its functionality.
That being said, I might consider swapping out some modules, for example to get other filter flavors or to integrate some different functionality for specific applications.
Of course, you will have noticed there's still a 1U gap in the base console to be filled with a module. This "missing" single module would most likely be a "space filler" doubling on already existing functionality, like a 3x1 mixer, or a dual cross fader, or a dual VCA, or even a reverb, or maybe something "fresh" like a 66B Control or even a Clock or a Switch... I'll see what comes up, hopefully soon !

Ok, now enough blabla... let's go back to making music !
Posted by Zeitdehner at 4:42 AM